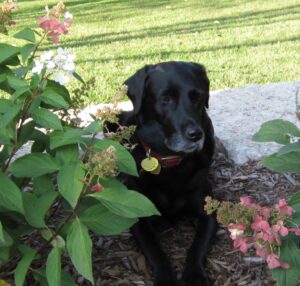 Basil’s 10 years on this earth haven’t always been easy. The black Labrador retriever, who was found as a stray before coming to FSD, had a previously broken leg that had been set incorrectly. We trained her and placed her with a veteran who she served faithfully for three years until he suddenly passed away in 2014.

Confused by the changes in her life, Basil returned to our facility, where a diagnosis of early-stage hip dysplasia caused her to retire as a service dog. Our adoption team started searching for a new home for Basil and reached out to Donna, a longtime volunteer at FSD who had helped care for Basil before moving to Sioux Falls, South Dakota. At the time, Donna was grief-stricken by the recent death of one of her dogs, so she declined. However, after she learned that Basil was still at FSD after a local couple changed their minds about adopting her, Donna declared, “I’m on my way!” and made the normally 14-hour drive to Denver in a blizzard. It took Donna 19 hours to return to Sioux Falls in whiteout conditions with Basil at her side. 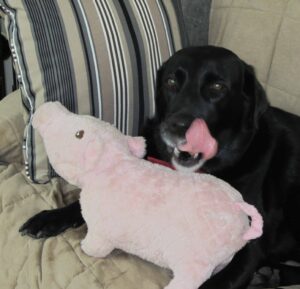 After giving Basil a few months to settle in with her new family, which includes two rescue dogs, Donna and Basil became certified as a therapy dog team. “After being at FSD, I had seen the power of service dogs, but I really didn’t appreciate the power of therapy dogs until Basil and I started our visits,” says Donna. “We have been visiting the VA and a local university now for three years. We visit the freshman dorms every week and attend chapel service every Friday, where Basil hands out bulletins to the students. The response is everything from a smile, to students kneeling on the floor to hug her, to telling me they only come to chapel to see Basil!”

Donna says she has been overwhelmed by the positive effect Basil has on everyone she meets, especially the students. Some were fearful of dogs before meeting Basil, but after a few visits, they become her biggest fans. During finals week, Donna and Basil visit the dorms more often to help reduce the students’ stress. Donna recalls one shy young woman who was worried about her tests and asked if she could pet Basil. Donna replied, “Of course, that’s why she’s here. She’ll make you feel better.” The student sat on the floor quietly petting Basil for a few minutes, during which she became visibly calm. She then looked up at Donna and said, “She’s magic.” Adds Donna, “I think that says it all.” 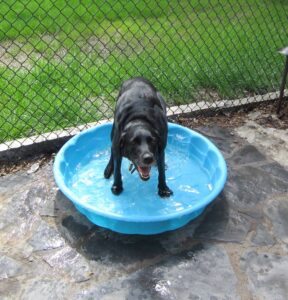 At 10 years old, Basil is slowing down a bit, and Donna is limiting their therapy visits—but the gratitude she feels for Basil is limitless. “When FSD called me, I just wanted to help Basil, but little did I know how much she would help me,” says Donna. “I found a purpose here, not only to promote the value of therapy dogs with the university, but also the value of rescue dogs in the community. Basil is happy, funny, and silly, yet so powerful with the gentle love she shares with hundreds of fans in over 400 visits. I am so proud to be at the other end of her leash!”