In honor of Veterans Day on Nov. 11, we’re sharing the story of U.S. Army veteran Zander, who was serving as a Blackhawk medevac crew chief during a deployment to Iraq when he was badly injured. He returned home with PTSD, traumatic brain injury, and a broken back, and now lives with spinal arthritis and deterioration that makes it painful and difficult to move at times.

After hearing about Freedom Service Dogs from a fellow veteran, Zander was accepted as an FSD client in 2021. He was matched with a service dog named Verde, and at their first meeting, Zander had a realization that he still vividly recalls. “This is real,” he remembers thinking. “Verde was so attentive, and his personality was showing, and it instilled this warmth inside me that I hadn’t felt in a long time.”

Zander attended FSD’s two-week placement class, during which clients and their new service dogs bond with each other, practice basic obedience skills, and learn cues that are customized to meet the unique needs of each dog’s partner. “Placement class was amazing,” says Zander. “It was fast paced with loads of information and, very honestly, nerve racking at first. I was so worried that I would do something wrong during training, but everyone was so kind and helpful that I became very comfortable and started coming out of my shell.”

Zander is a husband, father, and dog dad who works from home for the Department of Veteran Affairs. He recently earned his master’s degree in healthcare administration and plans to pursue a doctoral program. Despite his active life, Zander sometimes feels anxious in crowds and experiences other symptoms of PTSD. To assist in these moments, Verde has been trained to interrupt those symptoms by creating space around Zander in crowds, waking him from nightmares, and accompanying him on family outings, including sailing.

“Verde has helped me significantly reintegrate into society and integrate into crowded areas more easily,” says Zander. “He also allows me to be more independent when I lose the ability to walk or move. He helps me get dressed and picks up items for me on a daily basis.”

Zander says it’s been important to ensure that his wife and son understand that Verde isn’t a pet dog and that he is there to work and to help Zander. But that’s a small challenge compared to the big benefits that Verde brings. “I would definitely tell other veterans to check out FSD,” he says. “This service dog has truly become a huge part of my life, and I can’t imagine being able to do some of the things I have been able to do in such a short amount of time.” 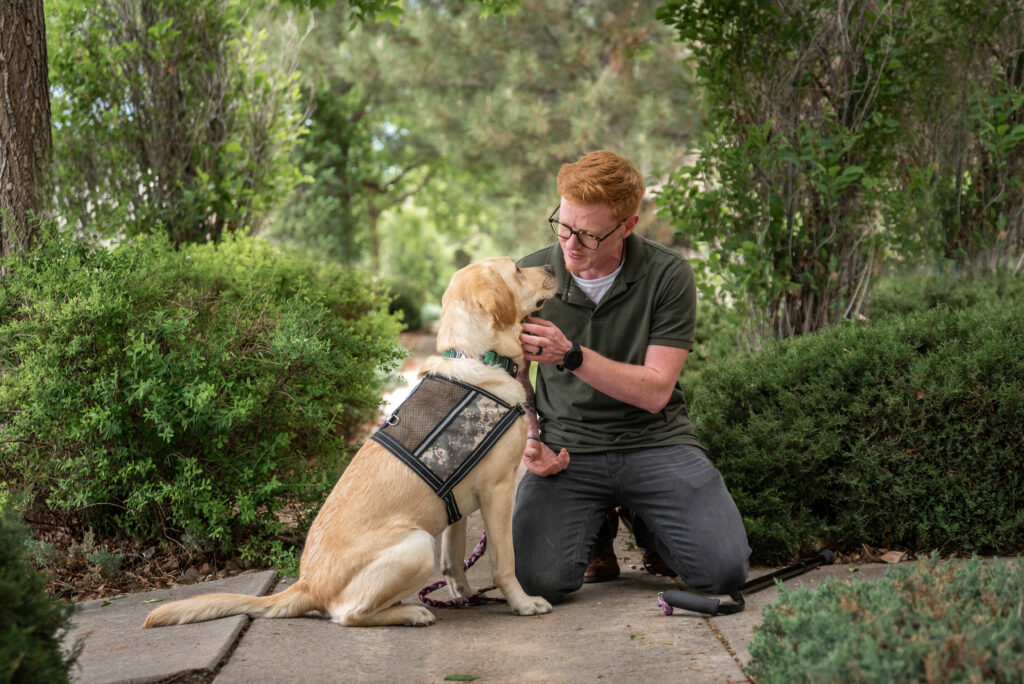 “Verde was so attentive, and his personality was showing, and it instilled this warmth inside me that I hadn’t felt in a long time.”