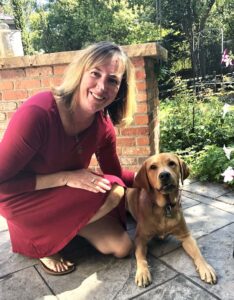 When Kristen Deevy joined the FSD Board of Directors in February, she was looking forward to her first meeting with fellow board members in March. Then the pandemic shutdown started, and in-person meetings ended. But even though Kristen is still waiting to attend her first non-Zoom board meeting, that hasn’t stopped this dog-loving dynamo from becoming a highly engaged board member and an enthusiastic volunteer puppy raiser for FSD.

Kristen’s interest in FSD was sparked by what she calls “a perfect trifecta” of personal passions that coincide with the organization’s work. “We’re such dog lovers in our family,” she says of herself, her husband, and her two teenage children. “Plus, my father is a veteran, and my mom was a special-needs teacher who worked with kids with autism, so I have deep connections to two of the groups that FSD supports. And then I attended the FSD graduation last December and was totally blown away by what I saw and heard there. It was so impactful to me.”

As a financial planner specializing in helping companies prepare employees for retirement through 401k plans, Kristen brings a wealth of expertise to the board and also serves on our Finance Committee. In addition to these duties, she makes thank-you calls to FSD donors twice a month and says, “It’s fascinating—and very moving—to hear the many different reasons why people donate to FSD. I often end up on the phone with someone for 15 or 20 minutes, just listening to their stories.”

But Kristen wanted to do more, so when she learned in June that an FSD volunteer puppy raiser was no longer able to keep his puppy, she stepped in and brought Baxter home. “I wasn’t sure I was ready for a super young puppy, but Baxter was 10 months old at the time, which sounded perfect. He’s a big goofball, but also really smart, and he’s added so much joy to our lives.”

Adds Kristen, “Friends keep asking how I’m going to be able to return Baxter to FSD in October for advanced training. I know it will be hard, but I tell them: That’s why you have to watch an FSD graduation and see for yourself the impact these dogs have on people’s lives.”