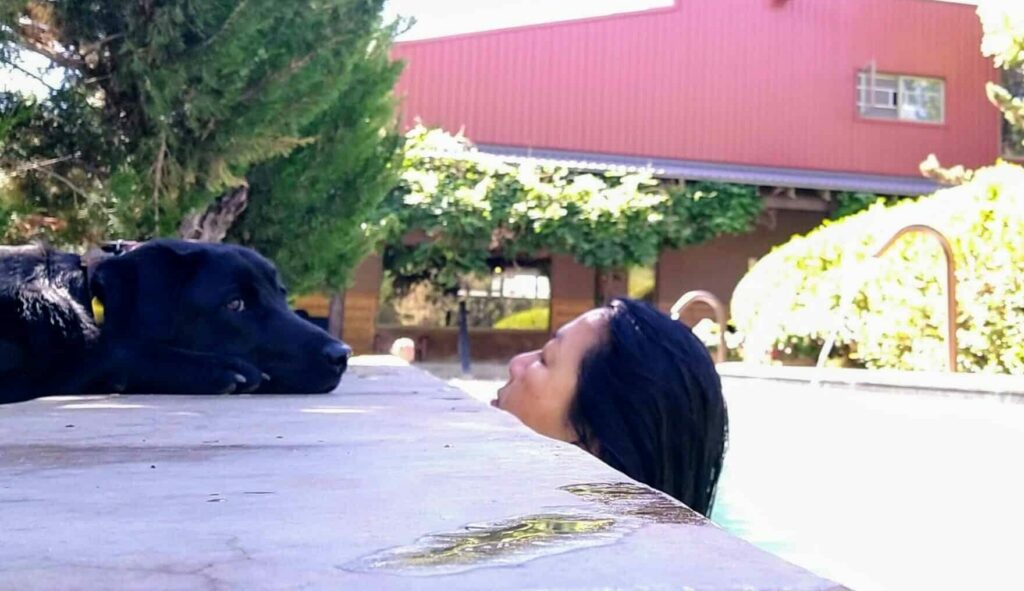 FSD volunteer puppy raiser Hue (pronounced “Way”) has a uniquely personal reason for helping to raise and train the next generation of Freedom Service Dogs. Born in Vietnam, Hue came to the United States at the age of 9, eventually earning a degree in electrical engineering from California Polytechnic State University before embarking on a successful career as a self-employed business consultant. “The opportunities for freedom that America has given me are mostly attributable to the veterans from the Vietnam War era,” says Hue. “I have always wanted to give back to veterans, and raising a puppy for FSD that could eventually be matched with a veteran is a great way to give back.”

Because Hue travels frequently for business, she knew that having a pet would be problematic. After learning about FSD from a client, however, she discovered that raising a puppy for the organization would allow her to take the pup with her on business trips as part of their training.

Hue went through FSD’s training program for volunteer puppy raisers last fall, and in December 2020, she brought a 4.5-month-old black Labrador retriever named Frisco home for 10 months of basic training and socialization. “Frisco is my first puppy ever,” says Hue, who has enjoyed the process of watching Frisco transform from a pup who slept almost constantly into a boundary-testing teenager and then an eager-to-learn and well-mannered young service dog in training.

Hue says FSD’s volunteer and puppy development staff has been extremely helpful in supporting her throughout the puppy-raising process. “I’m delighted with FSD,” says Hue. “They are one of the most organized, enthusiastic, and energized nonprofits I have ever been involved with.” 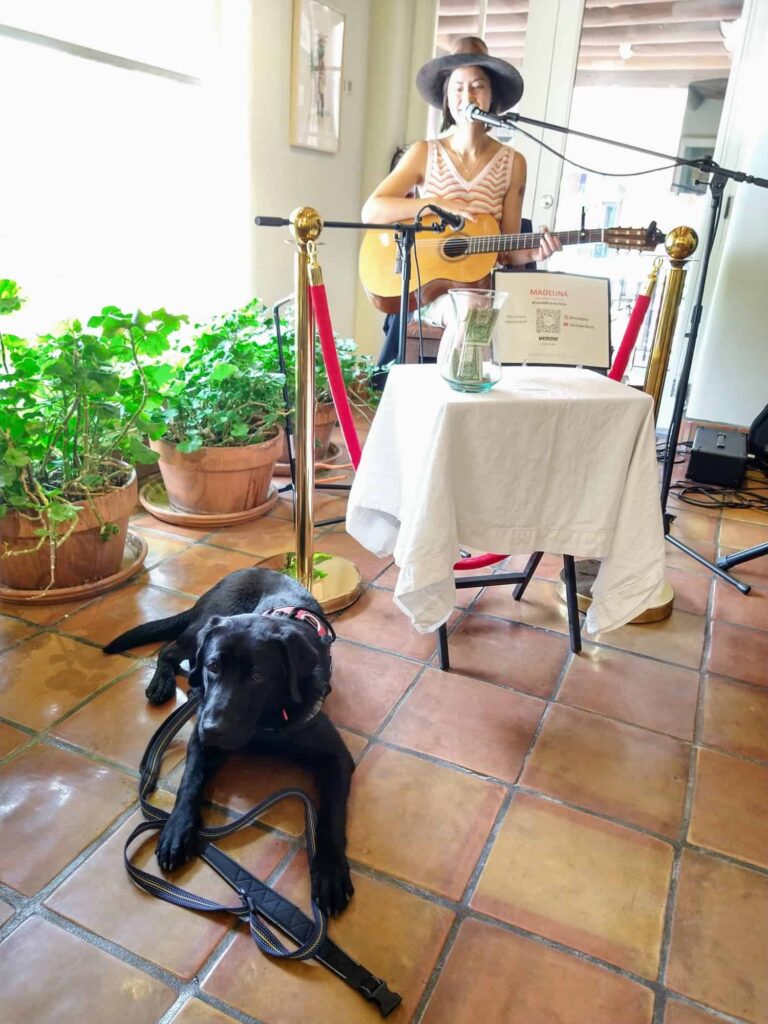 Since March, Hue has returned to meeting with clients in person, which means that Frisco accompanies her on these “workcations.” So far in 2021, they have traveled to the Four Corners area of southwestern Colorado, as well as Santa Fe and Taos, New Mexico.

“Frisco has been a well-traveled dog this year, and I’m really impressed by how his confidence has grown with each trip,” says Hue. “The more exposure he has to sights and sounds and other sensory input, the more he opens up.”

At Pecos National Historical Park in New Mexico, Frisco’s good behavior impressed the park rangers so much that they gave him a “B.A.R.K. Ranger” dog tag. The tags are available at more than 30 U.S. national parks as a way to encourage responsible national park travel with dogs. 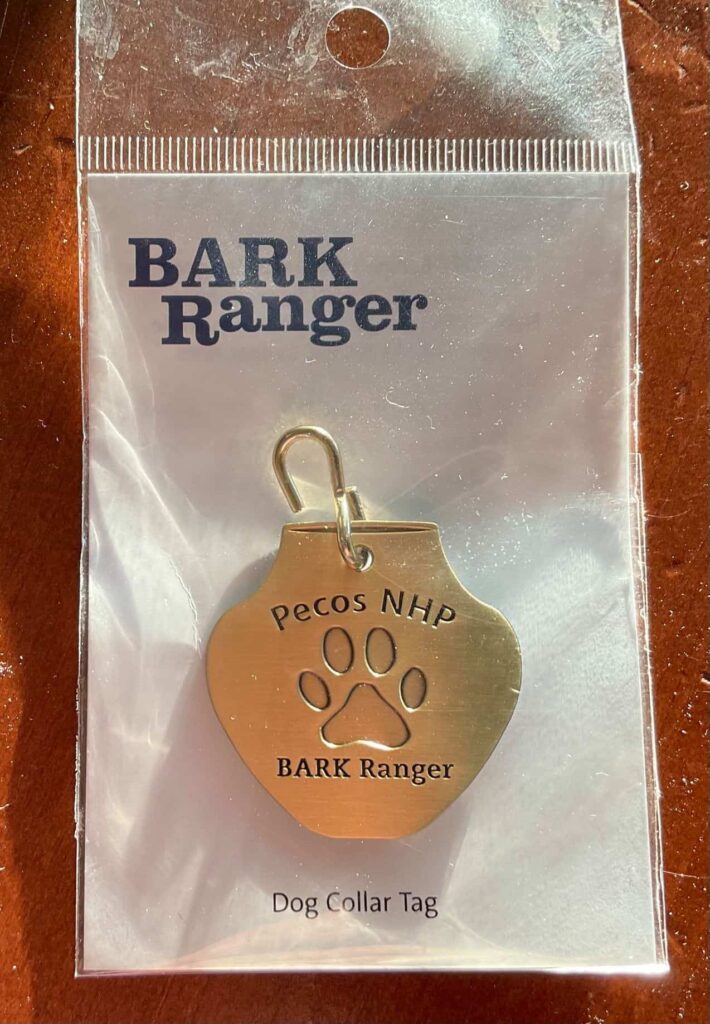 Hue says her favorite part of puppy raising has been watching Frisco make mental connections. “It’s very fulfilling when your puppy quickly ‘gets’ something, like the “Paws” command on a vertical surface, where the puppy is trained to put their front paws on a wall and hold them there for a minimum of five seconds,” says Hue. “Just yesterday, he was able to activate a push plate button on a wall to open the doors to a museum. Both Frisco and I were overjoyed that our efforts paid off after weeks of repetitive training on the walls of my home.”

Adds Hue, “I’ve learned that everything you do with consistency and confidence translates into your dog’s good behavior.”

Hue also credits Frisco with changing her outlook on the world around her. “Puppies have a way of opening your eyes to new opportunities. The neighbor next door, the library, the local park—they all become more interesting when seen through the eyes of a puppy.”

Since Frisco is just 11 months old, Hue has not yet arrived at the point of returning Frisco to FSD for advanced training and placement with a client, but she will be doing so later this year. “You give these dogs up for a greater cause, and since you know that from day one, I think that’s going to make it a little more manageable,” she says. “I’m excited to think about Frisco’s future.”

FSD urgently needs more volunteer puppy raisers who live in Colorado and nationwide! Learn more or contact Hannah Perruccio at [email protected] to find out how you can support this rapidly expanding program.