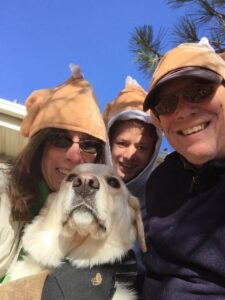 After losing their beloved dog, Harper, in 2015, Lynne and her family spent five months dog-less, allowing their hearts to heal. Lynne and her husband, John, are longtime financial supporters of Freedom Service Dogs, but they were unfamiliar with the fact that FSD adopts out dogs that are better suited to being pets than service dogs. In searching for a new four-legged buddy, Lynne and John discovered the adoptable dogs on our website and were intrigued by a Labrador retriever mix named Gus.

Recalls Lynne, “When John and I went to meet Gus at FSD, he was in an outdoor fenced area with very high sides and a top, courtesy of his ability to jump a 6-foot fence. It was as if Gus knew the final decision was mine, and he turned on the charm as soon as he saw me. He was affectionate and playful and just plain adorable. It took longer to complete the adoption paperwork than it did to decide Gus was coming home with us.”

Surprised and delighted with his new dog, Lynne and John’s 12-year-old son, Jack, renamed him Stan after a character in Disney’s “Dog with a Blog” TV show. But Stan has too huge a personality for one small name, so over the years he has acquired numerous nicknames, including Stan-tabulous, Stan-a-lama ding dong, MC Stanner, and Stan-a-saurus-rex, each of which is accompanied by little paw movements and a song or sound effects.

Stan’s true loves include being Jack’s number-one fan at every lacrosse game he plays, carefully and thoroughly dissecting squeaky toys, catching goldfish crackers tossed by his people, and riding in the car. As a rescue dog from New Mexico, Stan has had his challenges, says Lynne, “and just like any rescue, he needed patience and an attentive family to help him navigate his new life. He learned … and is still learning.”

Adds Lynne, “Stan makes us laugh every day with his ‘Stan-tics’ and ‘Stan-cidents,’ which are either incidents or accidents depending on the situation. I admit I didn’t think I could love another dog after Harper, but Stan defied that thinking.”

To learn more about adopting a career-change dog from FSD, click here.