Boy with autism opens up with service dog 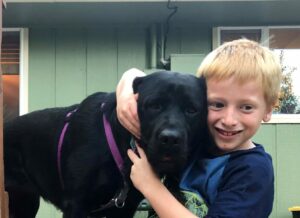 Wyatt is an active, affectionate, animal-loving 9-year-old who enjoys learning and mastering new skills. Wyatt also has autism spectrum disorder, which for this young boy causes sensory overload, social anxiety, and difficulty controlling himself at school and elsewhere—symptoms that have been debilitating for both Wyatt and his entire family.

But thanks to a patient and devoted Freedom Service Dog named Aussie, Wyatt has been “growing and emerging from the shell of autism,” says his proud and supportive mother, Amanda. “Aussie has been the catalyst to give Wyatt enriching experiences that make him whole.”

When Amanda first heard about Freedom Service Dogs (FSD) from a neighbor who fosters dogs for the organization, she knew immediately that her son would benefit from a service dog. Walking into places he didn’t know and meeting new people invoked a great deal of fear in Wyatt, so the family avoided going to restaurants, movies, and crowded parks. Wyatt also was struggling academically and would fall into a deep sleep on the drives to and from school, exhausted by simply trying to function during the school day. Watching with concern as her son continued to revert inward, Amanda says, “I wanted Wyatt to be able to have more social interactions. I wanted to bring a calming force into his life, give him a sense of empowerment, and build his sense of empathy.”

As the divorced mother of Wyatt and his 7-year-old sister, Amanda says that moving between her home and their father’s home was especially traumatic for her son. “The transition would take two or three hours, and it was one of the toughest parts of parenting. For someone with autism, a change in routine is very difficult; it feels horrible because it takes their grounding away from them. So Wyatt was always crying, running away, and hiding because it was so hard for him to leave one home and go to another.” 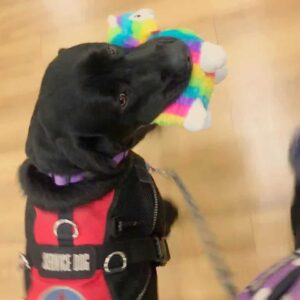 Once Wyatt’s application was approved by FSD, he was enrolled in our Disco’s Dogs program, which matches custom-trained service dogs with individuals as young as 5 years old who have autism or other neurocognitive disabilities. Although Wyatt had envisioned a male Labradoodle that he intended to name Bolt, he was paired with Aussie, a female black Labrador retriever. Says Amanda, “Aussie was nothing like the dog Wyatt had conjured up in his head, but she has an incredibly calm temperament, which is exactly what he needed. Rigid thinking is another hallmark of autism, but Wyatt quickly realized that if he wanted a dog, he would have to be flexible. Well, he really wanted a dog, so he came around within minutes as soon as he met Aussie.” (You can read about the miraculous day when Amanda learned that Wyatt had been matched with Aussie on Amanda’s blog post “What Hope Looks Like.”)

Wyatt and his family attended classes at FSD for 13 weeks, during which they learned and practiced specialized cues with Aussie that are designed to help relieve Wyatt’s symptoms of autism, including interrupting him during stimming episodes and providing weighted pressure to calm him. They also went on outings with their FSD trainers to the airport, mall, restaurants, and parks to get Aussie accustomed to accompanying Wyatt in public. “We looked forward to class every Sunday,” recalls Amanda. “It was inspiring to see Wyatt connect with Aussie, and very uplifting to watch him start to give her small cues, like Sit and Nudge, on his own.” 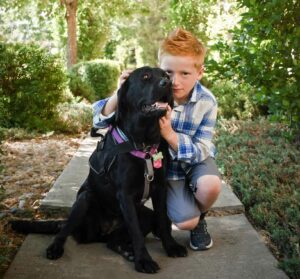 Wyatt and Aussie graduated from FSD in December 2019, and today, Aussie goes virtually everywhere with Wyatt: restaurants, grocery stores, church, parks, on airplanes, and anyplace with lots of lights and sounds. “With Aussie, it’s become almost commonplace for Wyatt to walk into a store or a restaurant without having an anxiety attack or being totally overwhelmed,” says Amanda. “In December, he went to see his first movie at a theater in three years, and thanks to noise-canceling headphones, a weighted blanket, and Aussie at his feet the whole time, he did just fine.”

While Wyatt cannot take Aussie places by himself until he is old enough to pass the Assistance Dogs International public-access test, both of his parents are certified handlers. They take turns bringing Aussie to the first day of school, to meet new teachers, and on every field trip. “Wyatt’s class loves Aussie, and the kids do a great job of not petting her,” says Amanda. “She has brought understanding and compassion to their young minds that we’re all unique and do things in different ways. They now know that some of us learn with dogs and do things with dogs, and that’s how we’re successful.”

Another Aussie-related success story relates to the formerly traumatic transitions between homes. With his service dog by his side, Wyatt no longer has the meltdowns he once experienced during transitions to either home. “Now we don’t even think about it because it’s so easy,” says Amanda. “Everyone gets in the car, and that’s it!” 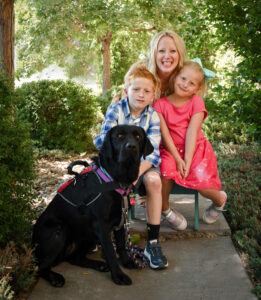 In fact, Aussie has proven to be therapeutic for the entire family. Says Amanda, “She is the most amazing dog for everyone. When my daughter gets frustrated with her brother, she goes over to Aussie and gives her a hug and pets her, or sometimes she takes Aussie to her brother to calm him. My daughter has a deep understanding of how Aussie helps Wyatt and of when he needs her support, and Aussie also gives the two of them something in common.”

Amanda is not only the proud and loving mother of a child with autism; she is an author and advocate who is passionate about the need to create a more empathic approach to understanding and talking about autism. As part of her mission to do so, Amanda has written a book about her family’s experiences called “The Clouds that Chase Us: A Journey into Autism”. “There is a stigma around autism, and it doesn’t have to be that way,” she says. “It’s actually really a cool thing, and we need to help people start to understand that.” 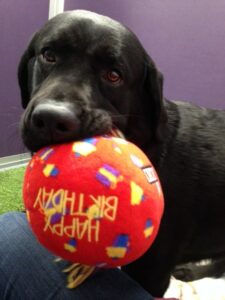 Amanda says the most challenging part of having a service dog is being mindful that Aussie requires ongoing training. “I can’t just assume that she is constantly going to respond to the cue system. She’s a dog and that’s her nature, and it’s my job as her human to ensure that she gets to enjoy being a dog while still fulfilling her job of being of service to my son. She can’t stay on top of cues unless I stay on top of them, which is one more thing on my to-do list.”

Asked what she would tell other parents who may be considering a service dog for their child with autism, Amanda responds thoughtfully. “I would say that there are so many resources and opportunities to support children with autism. Wyatt loves animals and responds to animals, so that’s the first piece of our success. Second, you have to be willing to change the way you think about yourself and your family. Aussie makes us more visible within our community and family; whereas before, we tended to hide from the public, now we go out into public places together.” 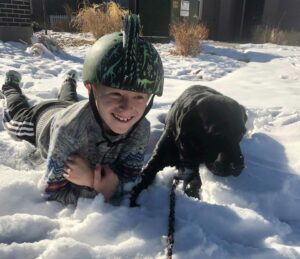 She continues, “You have to be prepared for those moments when people ask why you have a service dog, because you don’t look like you have a disability. When you respond to those questions, you have to be comfortable with your response, because sometimes it hurts. But in walking through that and feeling and experiencing those things, it makes you stronger and more compassionate and proud of the life you are living. You’re not perfect, and your dog is not perfect, but having a service dog brings out tremendous aspects of your child that you never knew were there before. And the end result is pretty incredible.”

April is Autism Awareness Month. If you have a child age 5 or older with autism or other neurocognitive disabilities and would like to know how a service dog may be of help, you can learn about our Disco’s Dogs program.