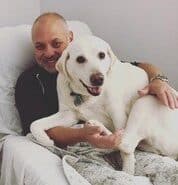 When Tony retired after serving 20 years in the U.S. Army, including two years in Operation Iraqi Freedom, he returned home with post-traumatic stress disorder (PTSD) and degenerative joint disease. “Life was definitely difficult,” says Tony. “I was less happy, and I was also a person that stayed home and avoided others and was close to myself. It was no future.”

After graduating from Freedom Service Dogs with a Labrador retriever named Promise in 2015, the veteran’s world has expanded to the point where Tony and his wife and youngest daughter moved to Spain in January 2020. “Promise is a loving and attentive dog who wants to give so much, and she 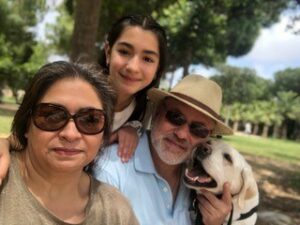 has brought so many things back,” he says. “I have become more social and have broken away from the negative behavior that PTSD has caused, all because I started to see a new day in the eyes of Promise. She is always ready to take that negative part of me and turn it into a smile.”

Promise was custom trained at FSD to alleviate the symptoms of PTSD by creating space around Tony so that he feels less anxious in crowded places. Says Tony, “We go out all the time, and she has become my shadow. Promise is also my orthopedic dog, as I have had my hips replaced three times and have had 14 operations. She takes care of my mobility deficiencies and gives me that extra jump to keep moving.” 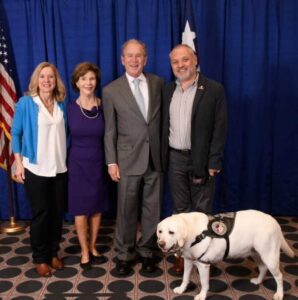 Tony and Promise have even ventured out as a team to represent Freedom Service Dogs at several functions. In 2019, they joined FSD President and CEO Michele Ostrander at the NAPE Charities Luncheon in Houston, where they accepted a $100,000 donation from the NAPE Expo Charities Fund and met keynote speakers and service dog supporters President George W. Bush and former First Lady Laura W. Bush.

Having a service dog was instrumental in giving Tony the confidence to make the life-changing move to Spain, where his mother was born. “Promise gives me freedom,” he says. “Looking back, I was not able to think of taking this adventure to Spain, as I was in a PTSD mentality of destruction. With the help of Promise, my wife and I decided to move to allow my youngest daughter to experience the world more and to learn about languages and culture that are different from the USA. And my father was French, so also to be close to France.”

Adds Tony, “Spain is good to us; we enjoy it very much and Promise is adapting well. There is a limited culture of service dogs in Spain, but they are protected as if we were in the USA. Promise loves the smells and the bus rides and the walks, and she loves posing for her pictures on Instagram. She is a happy soul!”

Asked what he would tell other veterans about getting a service dog, Tony says, “It’s definitely a commitment, but one that is great and gives so much in return. A service dog will take many of those things that PTSD gives you and transform them into something positive. I think that a service dog is a great way to avoid medications, as it relieves many of the symptoms of PTSD and only has good consequences. When you love your service dog, the love you get in return is even higher!”