As Veterans Day approaches on Nov. 11, we are tremendously grateful to all veterans for their service to our country—and in honor of all our veteran clients, we’re sharing the story of Missy and her FSD service dog, Glacier.

Missy served with the Nebraska Army National Guard while in college from 1996–2000 and then in the New York Army National Guard from 2000–2002. “As a soldier in the late ‘90s,” she says, “I can assure you we had very little expectation that we would be utilized for much more than a natural disaster. My two activations during my time in Nebraska were to assist in the aftermath of a disastrous storm at home and to travel to Honduras in 1999 to help with the post-Hurricane Mitch cleanup. Then September 11, 2001, happened—and everything changed.”

A member of the New York Army National Guard living in New Jersey at the time, Missy remembers the moment when her unit, based in Crown Heights, Brooklyn, was activated and ordered to report to their armory. As she recalls, “My drive across the deserted George Washington Bridge and down the desolate FDR Drive was the beginning of weeks of uncertainty, confusion, hope, horror, and service.”

For the next few weeks, Missy took part in the rescue and relief efforts at Ground Zero in New York City, where the terrorist attacks on the World Trade Center killed nearly 3,000 people. Of that time, Missy says, “I rarely talk about my experiences, to the point that many of my friends in New York didn’t even know I served. But after almost 20 years of living with PTSD (which I like to describe as ‘white-knuckling it’ through most of my days) and trying a wide variety of treatments, I finally decided to reach out to FSD.” 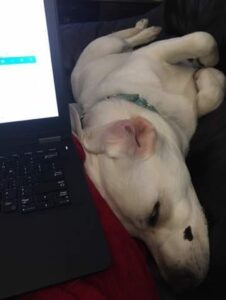 In addition to PTSD-related depression and anxiety caused by crowds and loud noises, Missy has fibromyalgia, a condition that causes widespread pain, sleep problems, and fatigue, among other symptoms. By the time she applied for a service dog from FSD, it had become increasingly challenging to perform her job as an executive assistant.

In 2019, Missy was matched with a gentle white Labrador retriever named Glacier, and the new team worked with their FSD trainer on tasks specifically designed to help alleviate Missy’s PTSD symptoms. These included creating space around her in public, interrupting nightmares, and providing weighted pressure to calm Missy when needed. 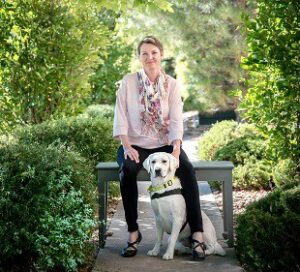 Missy and Glacier graduated from FSD in December 2019, and for a time, Glacier was able to accompany Missy to her job. “I was so thankful that I was matched with Glacier,” says Missy. “Pre-COVID-19, she came to work with me in downtown Denver every day. She often looked like she was lounging (her favorite spot is the kennel under my desk), but she was working hard for me. She made me feel secure and supported, and she helped get me out of my head and focused on something other than the rabbit hole of thoughts that come with PTSD. Her steady reassurance made it possible for me to continue full-time work, which had become difficult by that point.” 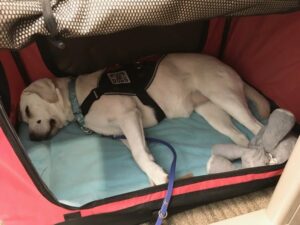 Missy says that Glacier provides another nice “extra” associated with the “Between” cue, which is used by our clients to ask their dog to sit, stand, or lie down between their legs, typically when they’re in crowds. Says Missy, “Glacier’s ‘Between’ helps provide more stability for me when standing in public. It’s reassuring to have that physical connection for my anxiety, but my fibromyalgia causes me to have balance issues sometimes, and her ‘Between’ gives me something to connect to.”

Missy admits that since she’s been working from home for the past seven months due to the pandemic, it’s been tempting to get “a little lazy” with Glacier’s formal training. “But knowing that I need to continue with her training gets both of us out of the house more than I would otherwise,” she says.

“The biggest challenge to having a service dog is just letting another living being into every single moment of your life,” adds Missy. “You have a partner with you 24/7. This can be tough if you’re used to being a solitary person, but it’s so important to help break up the negative self-talk and compel you to interact more with the world.”

Learn more about our programs and services for veterans and active-duty military personnel.