When Kim graduated from FSD in 2018 with service dog McGee, she returned to her home in Alaska with a highly skilled partner who quickly helped her become more independent. McGee assisted Kim, who has mobility challenges related to arthritis and diabetic neuropathy, by retrieving sodas from the refrigerator, opening drawers, tugging off clothing, finding help when she needed it, and performing other tasks around the house.

“McGee was doing awesome; he was an incredible dog,” says Kim. “I was blown away by how quickly he picked up cues and tasks. But I started noticing that he wasn’t following me to the bathroom at night, which he had always done previously. And then he would retrieve things for me like he always had, but they would be the wrong things. I would ask him to bring my cane, and he would bring me a soda.”

There seemed to be no reason that such a highly trained service dog was acting in such an unusual manner—until Kim took McGee to the veterinarian, where he was diagnosed with congenital hearing loss. Kim’s loyal service dog was going deaf.

After agonizing about what to do with her beloved companion, Kim made the difficult decision to return McGee to FSD so he could retire from service dog work and find a new home. “It was extremely emotional to give him up,” says Kim. “I still needed a service dog, but I couldn’t physically handle keeping McGee as a pet and then getting another service dog. Plus, I was afraid that he wouldn’t get as much of my attention once I got another service dog, and it wouldn’t be fair to him.”

McGee quickly found a new home with a loving family that has taught him some sign language so they can communicate with him. In the meantime, Kim and her husband, Norm, moved to Washington and waited to be matched with a successor dog that could meet her high level of need—just one of the many lifetime support services that FSD provides to all active clients at no charge.

“It was a long wait of two-and-a-half years because I needed a dog with lots of skills and drive, then there was COVID,” says Kim. “The wait for my second service dog was so much harder than my original wait, because I had learned that a service dog could give me the ability to do so many things. McGee had made me much more independent than I ever realized I could be.”

In March 2021, Kim got a call from FSD telling her that a successor dog named Gravy was being considered to meet her needs. “I was ecstatic,” says Kim, “and I flew to Denver right away to meet her. I didn’t want to compare the two dogs, so I was a little cautious with Gravy at first. But she was such a sweetheart, and she listened so well and handled so easily on a trip we took to Target, that any doubts I had were quickly removed.”

After completing placement class at FSD in April, Kim and Gravy are finding their groove as a team. Says Kim, “She is very eager to learn and really likes to work. She knows more than 60 tasks, including bringing me a soda from the fridge, picking up her toys and putting them away, opening doors, taking trash to the wastebasket, finding my cane, and locating help by searching the house for someone and nudging them until they come for me.”

Adds Kim, “I wanted a dog that likes their job because then they can learn everything. Gravy is really good during downtime and can chill, but she’s ready to go when I need her. I think as she gets older, she will become even more focused on my needs and her work. She can already predict what I need; for example, she started picking up my compression stockings and shoes and handing them to Norm, who helps me put them on every morning, all on her own. She is very intuitive.” 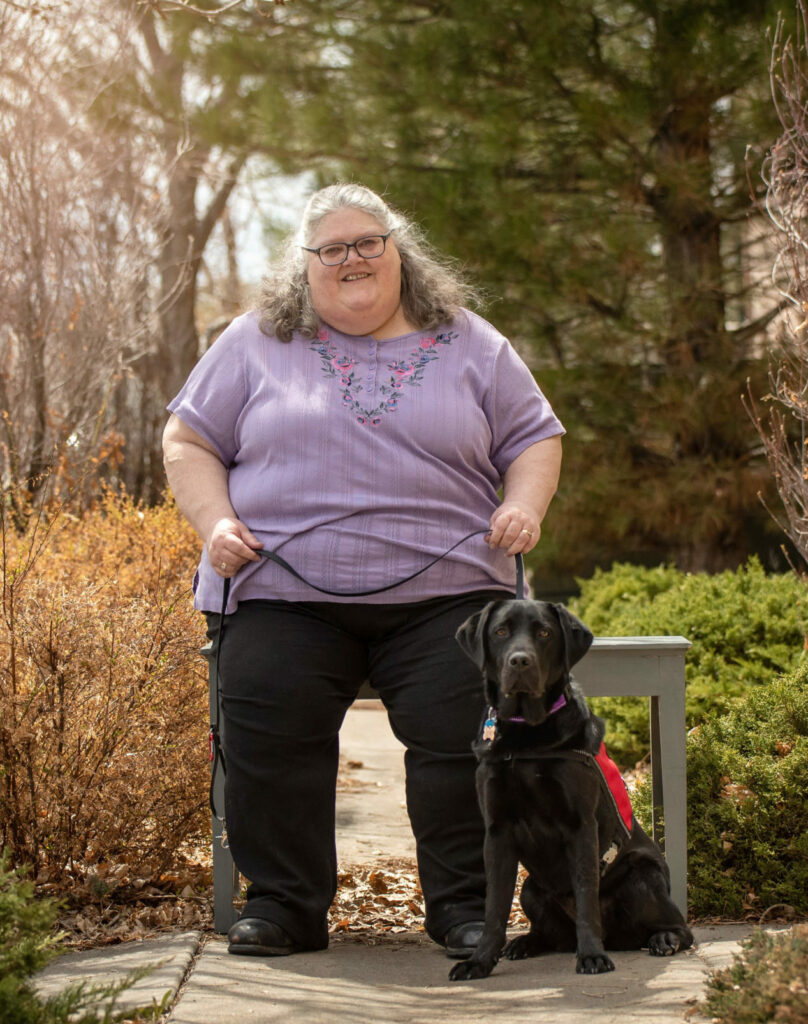 “I am extremely pleased with Gravy and with FSD. They have been wonderful,” says Kim, who is eager to have Gravy at her side as she resumes church activities, goes on cruises with Norm, and takes trips to visit her children.