Eddie & Alfredo: “He saved my life”

After 21 years in the U.S. Army, including four tours in Afghanistan, Eddie retired—but like so many veterans, he returned home with post-traumatic stress (PTS). “Throughout my four deployments, I experienced a tremendous amount of grief and loss,” says Eddie. “I returned home with physical scars, which I can deal with, but the most painful scars are the ones that you don’t see. The ones that are not visible. The ones that I have tried to hide from everybody. Those painful scars are what have not let me live my life to the fullest. Those injuries are the ones that made me alienate myself from everyone, including the ones that I love, and that haunt me every night in my dreams.”

Yet this brave and humble veteran continues, “The Army left me torn and broken, with visible and invisible disabilities, but it also made me the man I am today. It has given me the greatest things in my life: my wife and three kids, my pet dog, and now my battle buddy, Alfredo.”

Last fall, Eddie was matched with Freedom Service Dog Alfredo, a fun-loving and loyal Labrador retriever. “From the moment I saw him, well, he has no idea, but he saved my life,” says Eddie. During their two-week placement class at FSD, Eddie and Alfredo practiced basic training cues and learned specialized cues to help alleviate the symptoms of PTS. They also made a successful shopping trip to Target during the holiday season—a major milestone for Eddie, who had not been to a store in over seven years due to the anxiety caused by crowds. 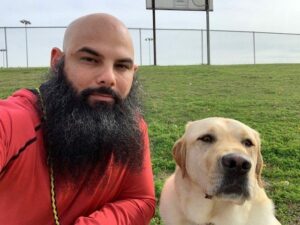 Eddie and Alfredo graduated from FSD in December and returned to their home in Texas, where they spent a week with FSD Trainer Laura McGaughey learning how to function smoothly as a team in their home and community. After seeing the duo in action, Laura said, “I am tremendously touched by the connection Eddie and Alfredo share (and have had from the very beginning), and proud of how well Eddie cares for him and how diligent he is with maintaining and advancing Alfredo’s training. It makes me so happy to have been part of such an amazing match.”

In the past nine weeks, Alfredo has given Eddie a new sense of comfort, confidence, and independence. Says Eddie, “Alfredo has forced me to get out of bed and be more active, even if it’s at home. I’m not as anxious about leaving the house now, so I have spent more time with my family outside of my house, including going to a movie theater together for the first time in almost eight years. Whenever I go somewhere, Alfredo provides space between the crowds and me, which is very helpful because it provides me peace of mind and gives me the buffer that I need from people. I have had numerous anxiety attacks, and he has calmed me from them. He has woken me up from several nightmares, even though that’s one of the tasks he’s working hard to improve. Alfredo is the battle buddy that I have been missing.” 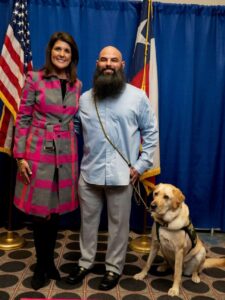 With his service dog by his side, Eddie’s confidence has increased so greatly that the team recently traveled to Houston for the NAPE Expo, a huge gathering and marketplace for the oil and gas industry. Eddie and Alfredo joined FSD President and CEO Michele Ostrander, FSD Board of Directors Vice Co-Chair Blake Finley, and FSD Board Member Noel Wickwar at the NAPE Charities Luncheon, an annual event where funds are distributed to organizations that honor and support veterans. For the second year in a row, FSD was honored to receive a portion of the NAPE Charities funding, and Eddie and Alfredo proudly accepted a check presented by Nikki Haley, former U.S. Ambassador to the United Nations, for $75,000 on behalf of FSD.

“Words cannot express how happy and grateful I am to FSD,” says Eddie of receiving his life-changing service dog—as well as a lifetime of support—at no charge, as does every FSD client. “Because I was partnered with Alfredo, Freedom Service Dogs has saved my life and has given me a second chance to live my life to the fullest. I hope to receive many years of comfort, love, and help from my battle buddy, Alfredo.”