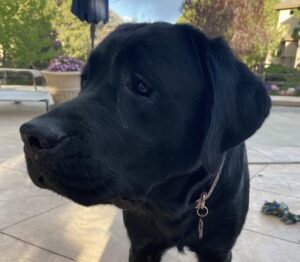 Once upon a time, a lovable black Labrador retriever named Gear was on his way to becoming a Freedom Service Dog. Unfortunately, his tendency to inadvertently urinate when he was excited or tired out from playing hard made it impossible for him to continue that particular career path. So Gear switched gears, and FSD started looking for a forever home with an understanding family where he could be a cherished pet. 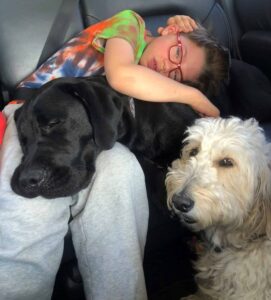 During the search, Gear was fostered by a family that is very familiar with FSD. Parents Brenna and Kirk have served numerous times as weekend fosters for FSD dogs in training, and their son, Max, who has a rare genetic disorder, graduated from FSD with a service dog named Bea in 2017. (Read Max and Bea’s sweet story here.) Gear stayed with their family for a time last fall and then returned to their home in early 2020 and throughout the first two months of the coronavirus pandemic when FSD closed its doors.

While the entire family adored Gear, Brenna says they realized it wouldn’t be right to adopt him themselves. “It’s hard to have a service dog and a non-service dog, as well as three children, one of whom has special needs. It also felt selfish to keep Gear ourselves because he brings so much joy to others. We felt sure we could find someone we knew to adopt him because everyone who meets Gear falls in love with him, so we reached out to a few friends to see if they were interested.” 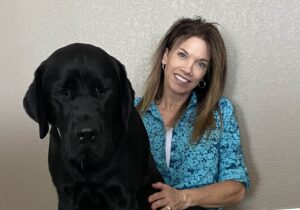 One of those couples—Alyssa and Phil—had coincidentally just put in an application to adopt a black Lab from FSD. Not only did they have a passion for black Labs, but their son and Brenna’s daughter had gone to elementary school together, and the two families lived just a mile apart. It seemed like an ideal match for Gear—and it was.

Says Alyssa, “We had decided we wanted to adopt a dog, but we have an 11-year-old Lab who is aging quickly, and we did not want a new puppy to be jumping all over him. We thought FSD might provide a good option for us in that the dog would be older and have some training. Once we met Gear, it didn’t matter why he was being released from FSD. He had the exact temperament that our older dog needed. Plus he is beyond sweet; playful and friendly, but also quite calm. We renamed him Augie after the main character in the book ‘Wonder’.”

Adds Alyssa, “Augie is our fifth dog, in addition to our cat and three kids. A little inappropriate urination was not going to be a deal-breaker for us, as we have dealt with much worse. Now that we have gotten to love Augie, I can’t imagine life without him.”

Since the April adoption, Augie has gone to Brenna’s home for day-long playdates almost every week. Says Alyssa, “We love that they want to continue having Augie remain a part of their lives. Brenna and I have a nice routine worked out where I put Augie in her yard in the morning, and she drops him off in my yard at dinner time. We all love it!”

Brenna agrees. “Augie has a bigger family now, and we’re all his people. Bea is Max’s service dog, and she knows where he is at all times and is always there for him, but Gear is his soulmate in a different way. Seeing his interaction with both dogs is so rewarding.”

Brenna says they love weekend fostering and will continue to foster for FSD. “It’s really fun for a family to see new dogs with different personalities, and it gives Bea a pal for the weekend.”

Meanwhile, Alyssa and her family have also become huge fans of FSD. “Although we originally wanted to get a puppy, I would adopt again from FSD if the opportunity presented itself. You cannot beat the training and worldly exposure these dogs get in the first few weeks and months of their life. Adopting one is a great way to give back and support a much-needed service within our community.”

Learn about adopting a career-change dog from FSD.