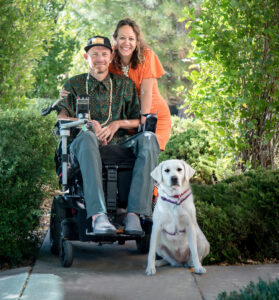 Spend five minutes chatting with Adam (pictured here with his wonderful wife, Tanell and service dog Miso) and you’ll discover that this man’s adventurous spirit, positive outlook, and love for his family were not only undamaged, but strengthened by the severe spinal cord injury that forever changed his life.

In 2012, Adam was a 35-year-old husband and father who epitomized the active, outdoor Colorado lifestyle. That year, on a routine mountain bike training run, Adam took a small jump and tumbled off his bike. Although he was wearing a full-face helmet, he landed vertically on his head and broke his neck. Within an instant, Adam became a C4 quadriplegic, paralyzed from the neck down.

Since the accident, Adam has regained some sensation and continues to build strength through years of rigorous physical therapy, attending six to eight sessions a week. But his new physical situation, which includes using a power wheelchair and being without hand function, affected him, his wife, Tanell, and his three children in unexpected ways.

“As a husband and dad, I always took care of my family. I loved being self-sufficient and doing things myself. I was a woodworker, I fixed our vehicles, and I repaired everything around the house,” he says. “After my injury, Tanell became my caretaker, and the responsibility for our kids fell mostly on her. The routines that we had and the things we did with our children changed significantly. We found ourselves struggling to find things to do that would bring us together as a family.”

While Adam was in rehab at Craig Hospital in Englewood, Colorado, he met someone from Freedom Service Dogs who was visiting with a service dog (FSD regularly brings service dogs to Craig, a nationally known rehabilitation hospital for patients with spinal cord and traumatic brain injuries). Intrigued by the idea of getting a service dog of his own, Adam applied to FSD and was eventually called in for an interview.

Says Adam, “I was so impressed that they spent four hours with me, asking all kinds of questions about my lifestyle, my needs, and my preferences in a dog. I was amazed because it was clear that they were extremely invested in their dogs and in making the right match. It’s such a solid place, and the dogs are so well looked after.”

After two years on the waiting list, Adam was matched with an FSD service dog named Miso in October 2019. “When I first met Miso, I was over the moon,” recalls Adam. “It was like she was beamed out of a major box-office movie: cute, attentive, sweet, loving, affectionate. Everything you could possibly want in a dog.”

After spending several months in training at FSD to learn standard cues, Miso worked with Adam and their trainer for two weeks to add custom cues that would meet Adam’s specific needs. Miso is trained to open and close doors, tug off Adam’s jacket, and retrieve items from off the floor or inside a backpack, among other tasks. She also happily accompanies her adoring handler wherever he goes. Says Adam, “Miso is always there for me.”

But according to Adam, his new service dog provides much more than physical assistance. “Miso brings this amazing cohesion to our family,” he says. “She’s just so affectionate, so smart, so attentive, and so remarkably professional for a dog that’s just 21 months old. Also, my two young girls never got to see the side of me that cared for an animal, so now they get to see me having a deep, affectionate relationship with a dog. It’s a different side of their dad that I’m happy they can see. Having Miso has made a huge, positive impact on all our lives.”

This year, Adam plans to get a van that can be converted to accommodate his power wheelchair and allow him to drive, and he will depend on Miso to help him get in and out of the vehicle. “My goal is to drive myself around for the first time, get to my own therapy appointments, and go visit friends. It’s all about independence.”

After getting to know this unstoppable man (did we mention he’s an avid sit skier?), we have no doubt that Adam will continue to savor life to its fullest, with Miso and his family alongside every step of the way.