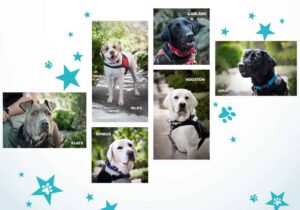 Six terrific client-dog teams graduated from Freedom Service Dogs during an emotion-filled ceremony on June 15 at Parker Arts, Culture & Events Center. The honorees included three veterans and two clients with mobility disabilities. The event also featured a demonstration by members of our community-based Puppy-Raising Club who showed off the skills they’ve instilled in their young charges.

Two of the veterans graduated from FSD’s Operation Full Circle program, in which veterans with PTSD and traumatic brain injury work alongside our trainers for four months to train the dogs provided to them by FSD. The three other teams attended a two-week placement class at FSD’s training center, where they built on months of training the dogs had previously received from our professional trainers. During that time, each dog was custom trained to assist their new person with specific tasks, while each handler learned basic dog care and behavior, practiced commands, and bonded with their dogs.

We hope you’ll enjoy reading about all our remarkable graduates!

Matt & Garland
Matt, who suffered a spinal cord injury more than 25 years ago, enjoys an active lifestyle that has been enhanced by Garland, a black Labrador retriever. As Matt’s skilled companion, Garland is trained to retrieve important items like the remote control, keys, mail, and the phone. She is also learning to push an emergency button or go for help. Garland came to FSD from Colorado’s Prison Trained K-9 Companion Program. 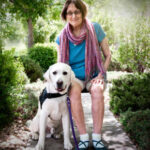 Kim & Nimbus
Kim became partially paralyzed after suffering inflammation in her brain due to a severe reaction to medication. She graduated with Nimbus, a white Labrador retriever who assists Kim by retrieving items, opening and closing doors, tugging clothes on and off, and finding Roger, Kim’s husband and devoted caregiver. Nimbus came to FSD from Mile High Labrador Retriever Mission in Broomfield, Colorado. This team is sponsored by Dr. Marty Pets.

Brooke & Houston
U.S. Army veteran Brooke graduated with Houston, a white Labrador retriever who helps alleviate symptoms of Brooke’s post-traumatic stress (PTS), including anxiety, depression, flashbacks, and nightmares. Houston has been trained to create space around Brooke in crowds, nudge his hand to interrupt flashbacks, and help him feel more comfortable in public places. Houston came to FSD from Mile High Labrador Retriever Mission in Broomfield, Colorado. This team is sponsored by Becky and Monty Davis.

Parker & Silas
Parker is a U.S. Marine Corps veteran who has been diagnosed with PTS and depression. He graduated from FSD’s Operation Full Circle program with service dog Silas, a pointer mix who has been trained to provide pressure during sleep, interrupt stress response while in traffic by resting his head on Parker’s shoulder, and more. Silas came to FSD from Starmark Animal Behavior Center in Hutto, Texas. This team is sponsored by Vets Helping Heroes. 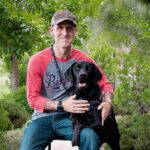 Cory & Opus
Cory, a U.S. Army veteran, was injured in a blast while serving overseas. He returned home with traumatic brain injury and PTS, including symptoms of anxiety, paranoia, and hypervigilance. Cory graduated from Operation Full Circle with Opus, a black Labrador retriever who is trained to create a barrier around Cory in large crowds or open spaces and help him stay calm in stressful situations, among other tasks. Opus came to FSD as an owner surrender. This team is sponsored by Vets Helping Heroes.