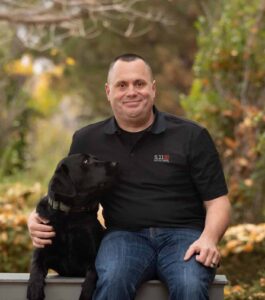 “I can trace the exact moment when everything changed, when something snapped in my head and everything went black and my head turned upside-down. In that split second, my life started to take a turn for the worse and spiral out of my control.”

Those are the words of Tyson, a veteran of the U.S. Navy, U.S. Air Force, and U.S. Army who served seven tours in Iraq and Afghanistan. After returning home with post-traumatic stress disorder (PTSD), Tyson became increasingly isolated, often sitting for hours on end in a dark basement trying to fight off memories of the terror and suffering he had witnessed during his deployment. “I couldn’t eat, sleep, or enjoy my life in any way,” says Tyson. “Things were not going in the right direction, and I was starting to be antisocial to pretty much everybody I knew. Worst of all, I was constantly afraid of the outside world. I was a prisoner in my own home, unable to sleep, having multiple nightmares, and just being on edge all of the time.”

Adds Tyson, “Even though I served in the military pretty much my entire life, and the military trained me to do many different jobs in a variety of hostile environments, as well as how to survive a variety of combat situations and how to cope with being in constant fear of dying while in combat, they didn’t teach me how to survive in real life and regular society when I was back home, where I was safe and secure and with the people I loved and wanted to be around.”

After suffering from hypervigilance, panic caused by loud noises, flashbacks to combat situations, night terrors, and manic depression for more than seven years, Tyson tuned into a documentary about military veterans with PTSD who were being helped by service dogs. Recalls his wife, Adrienne, “He told me, ‘You have to come see this. Right now.’ He was a mess, crying and shaking, and he said to me, ‘Help me.’ I said, ‘What do you need?’ and Tyson said, ‘I really think a service dog could help me.’”

Soon after, Tyson completed an application for an FSD service dog, but he didn’t believe he would be accepted. “I thought my issues were miniscule compared to some of the people that I thought really needed a service dog more than I did,” says Tyson. Nevertheless, several weeks later he was invited to FSD for an interview, after which he met several dogs, including Argon, with whom Tyson felt an immediate connection.

After completing placement class, Tyson and Argon graduated in 2015, and for the next six years, the two were inseparable. “Because of you,” wrote Tyson in a letter of gratitude to Argon, “I’m no longer a prisoner in my own home. Just like my battle buddies were my eyes and ears in Iraq and Afghanistan, you’re my eyes and ears here in the States. You allow me to use your shoulders and hips as a brace when my war-torn body is too sore to get up. You sleep in my bed, always making sure I am safe in my dreams. You have saved me from me and completely enriched my family’s lives. And best of all, I can’t remember the last time I had a nightmare or night terror episode or thought. You truly are my best friend, you saved my life, and you made my life even better than I ever thought it could be.”

Says Adrienne of the bond that formed between Argon and Tyson, “It was the most beautiful thing I’d ever seen. The only way I can explain it is that Tyson related to Argon like he was a soldier. I’ve never seen a kinship evolve so quickly. It’s pure devotion. Total loyalty. It’s a place that a human can’t reach.”

When Argon began experiencing health issues, Tyson knew that the time was nearing for his beloved “battle buddy” to retire as a working service dog. He applied to FSD for a successor dog, which FSD provides free of charge to active clients as part of our lifetime support program. In December 2020, Tyson was matched with his second FSD service dog, Fergus, for whom he has high hopes. “When I first got Argon, he made me get outside more and kind of fit back into society a little bit easier,” says Tyson. “That’s what I hope Fergus does for me. I think Fergus will make it more possible to manage my life and be more personal to people, to think about the positive stuff in life instead of about the negative stuff in life.”

As Tyson lounged on a couch with Fergus and Tyson in our Winter 2020 Graduation video, he looked fondly at his former and current service dogs. “As you can tell, they are very focused on me and very attached to me. So it’s like my constant shadow of two dogs.” Then after a pause, Tyson continued, “You made my life worth living.”