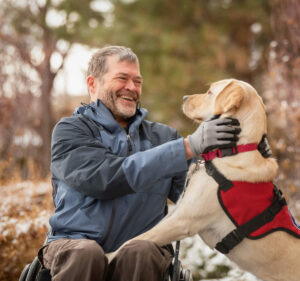 In 2015, Stephen suffered an injury that left him with almost no movement below the waist. After spending 10 weeks in intensive care and inpatient rehab, and several more years of physical therapy, he has recovered significant strength and movement in his legs, but he will always depend on forearm crutches and a wheelchair to get around. Despite his physical improvement, Stephen found himself isolating at home and finding excuses not to get out and do some of the things he loves: camping, flying drones, and meeting friends in coffee shops. 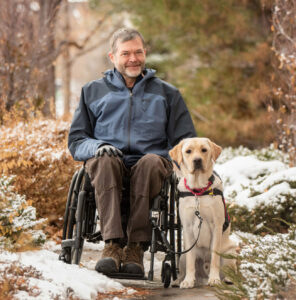 “It was too much of a hassle to deal with the wheelchair or the crutches, and it’s just easier to think of excuses and say, ‘It’s just not really worth getting out. I’m just gonna chill today.’ And then it was chill tomorrow. And then it ended up being very stuck at home and not getting out.”

All that is starting to change, now that Stephen has FSD service dog Braxton at his side. After applying to FSD in 2018, Stephen was matched with the lovable yellow Labrador retriever last fall, and they graduated together in January. Braxton has been custom trained to assist Stephen with tasks such as picking up Stephen’s crutches and handing them to him, opening doors, and being alert to Stephen if he has a life-threatening asthma attack and needs help. 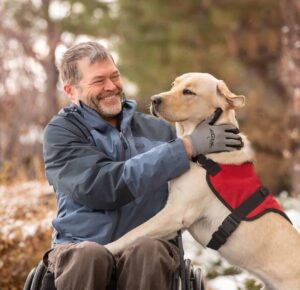 Says Stephen, “Braxton is very, very attentive. He’s a very affectionate dog who likes being close to me. That was very surprising, and I find myself really connecting to that. But there’s a whole other side to it that’s not so obvious, and that’s the relationship that you develop with your dog. I can feel that bond forming, a synergy that’s developing, and it’s energizing just to have that companionship. I think having a service dog is going to allow me to be more interactive, not just with Braxton, but with friends and other people and getting out and doing things. Braxton brings a lot of energy, and so that energy transfuses to me and kind of gets me going.”

“I am absolutely blown away by just how much effort has gone into training the dogs at FSD and raising them and getting them ready be service dogs,” says Stephen. “I definitely feel a lot of responsibility to make sure it works and that he’s taken care of. It’s quite humbling, and I feel quite privileged to have the opportunity to have a service dog.”